What is your idea of education? For most of us, it may bring to mind a classroom, lectures, homework and the like. What about real-world experience? For those that think in practical terms, real-world experiences are invaluable in the education and learning process. The Small Business Development Center (SBDC) in association with UCC sponsored and promoted an event called Startup Weekend which provided local entrepreneurs, UCC students & faculty, and others a chance to experience the best of what the business world has to offer – the chance to propel an idea to reality by bringing it to commercialization. What is Startup Weekend?

In the words of UCC Computer Information Systems student and Startup Weekend participant, Eric Mendenhall, “Startup Weekend is an event ‘powered by Google’ that allows you to make a business pitch, and create a startup business around it. There are coaches and staff on hand to assist you during this time, as you learn about the basics of founding a startup and launching a successful venture. This event happens all over the world, and on Friday, April 24th, the event occurred here at UCC. A total of thirty-two business pitches were made from local individuals, as well as those that came from as far away as Klamath Falls. Once the pitches were made, everyone involved got to vote on their three favorite pitches. These pitches included a wide variety of concepts – an online health club, emergency app, power-generator system, healthy fast-food delivery service; and even included things like drones, robotic limbs, and hover-boards. We each had sixty seconds to introduce ourselves, our pitches, and the importance of the concepts behind our pitches.” 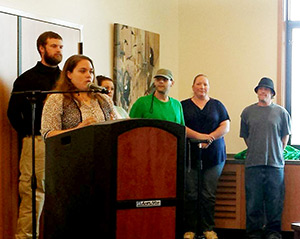 Kemberly Todd, one of the Startup Weekend organizers added, “Startup Weekend began with almost 100 people gathered to pitch or hear the best new idea, contestants were treated to a fast pitch practice exercise. Nine teams were asked to use only two words from a mad-lib style board to craft a new business and give a 30-second pitch about it. The laughter caused by pitches for Chocolate Dumbbells and a Computer Hamster was just what was needed to loosen up nerves before the main event. The main event is where some brave people, comprised of community members, students from UCC, U of O, OIT, and area high schools, gave their idea for a product or service in 60 seconds. About 32 pitches from the 66 attendees where heard. The popular vote decided what ideas moved on to be developed by teams. In all, eight teams were formed around the top ideas. Three of those teams were led by UCC faculty and students. Now the real work began, because the next 54 hours were filled with coaching experts, speakers, and lots of caffeinated work.”

One of the standout pitches of the event was brought forward by UCC student, Cassie Bauer. Cassie headed a cooperative team that presented an ENS (Emergency Network System), an app that alerts subscribers to the many hazardous conditions that pose danger or loss of time. The idea involves having one app that has access to natural disaster, traffic, and emergency information, and would use push notifications to alert the subscriber. Cassie's product didn't win as the judges cited app development costs as being too low. However, she gained some new tools and connections from her 54-hour experience in building a business. "What a wonderful weekend to be remembered!", said Cassie. This same thought was echoed by many participants.

John Blackwood, a UCC Computer Information Systems faculty member, and his team were the winners for his idea called “TreeShields”. The idea sprung from a problem he was having with critters eating the fruit on his trees. The solution involves wrapping some sheet metal around the trunk of the trees to stop critters from climbing up. The judges cited his product as the one most ready to hit the market in 30 days. John's team was the only one that provided all six judges with a two page marketing and business plan.

Altogether, 12 UCC Computer Information Systems and 3 Engineering students pitched ideas at the event. What did they learn? John Blackwood answered, “What was learned here could not be learned in a classroom. Students had to speak in public; become part of a team (and lead it in the case of Eric and Cassie); learn about time management, profit/loss and cash flow; learn about patenting and other legal concepts; learn how to present their final project in front of judges and potential investors; accept and implement criticism; become flexible in problem solving; and to just generally get along with a group of people previously unknown to them.”

UCC is committed to providing quality education through experiences that help students to learn to apply their classroom knowledge to the real-world. To find out more about education at UCC, explore our transfer programs, career technical programs, apprenticeships and more. To find out more about the Small Business Development Center, please visit http://www.umpqua.edu/sbdc.