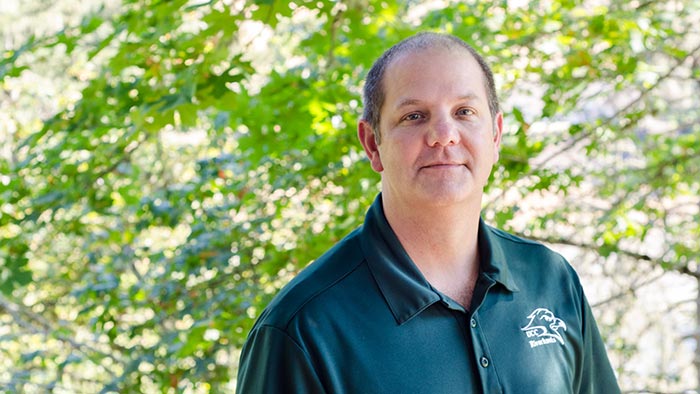 “The skills and education that is gained in the criminal justice field will only help you be a better person, have a stronger skill set and be a more marketable candidate for whatever path you chose.”

A high school friend of Yori’s suggested that they join the military as Military Police Officers (MP) so they could later pursue a career in law enforcement. As an MP, Yori did Army field work as well as traditional police work. During his three year service, he was deployed to Japan (Orient Shield) twice and Korea (Team Spirit) and Thailand (Cobra Gold) once. These deployments were a part of an annual training with the country’s forces and other U.S. Military units from around the world.

Shortly after leaving the Army, Yori joined the local National Guard unit in Roseburg while attending UCC to help with income. He was hired by the Douglas County Sheriff’s Office (DSCO) soon after joining the Guard and was allowed to end his tour early as his service became a hardship on his employer. This helped Yori realize that he preferred traditional MP duties over field work.

“It took me many years to get my associate’s degree from Umpqua Community College due to lack of motivation at times and shift work with the Sheriff’s Office,” Yori said. “In the criminal justice field, having an education is one of the best ways to advance. It helps you advance monetarily by getting pay incentives for your certificates and degrees, but it also helps you become a better employee with a stronger skill set that helps open up many opportunities that would not be there otherwise.”

Yori decided to continue his education after obtaining his associate’s degree in order to expand his opportunities as well as diversify his degree. In 2011, Yori earned his Bachelor's degree in Business Administration from Liberty University. He then transferred to Northwest Christian University and obtained his Master's degree in Business Administration in 2014. Both Yori’s bachelor’s and master’s degrees were acquired through distance learning programs offered online.

“Competition is high to get into the field, and once there you need all the advantages you can get to move forward in the career to promote or move into special assignments or positions,” Yori said. “Education helps tremendously in this way, but it also makes you more marketable if you do decide to switch career paths.”

His most recent career changes has been taking on the position of the Criminal Justice Coordinator at Umpqua Community College in 2019 and Distance Learning Coordinator with UCCOnline in August of 2021.

As a major plus for students, Yori often finds himself referring to the education he received as a former UCC student to help improve his teaching methods.