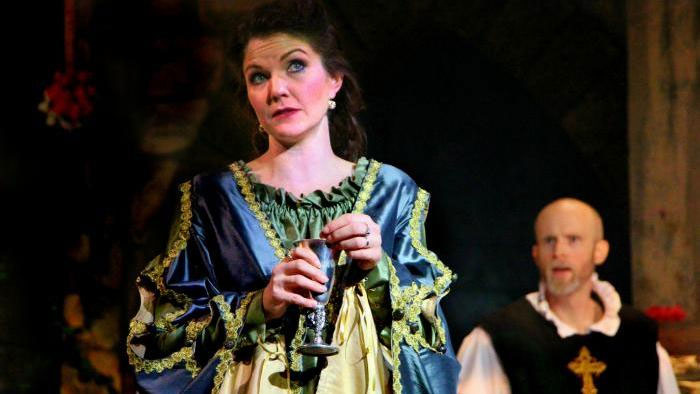 Last-minute cast change turns offstage husband and wife team into an onstage one.

ROSEBURG, Oregon – King Henry II of England has more than his share of drama. Three sons want his crown. The scheming wife he sent to prison a decade earlier for plotting against him wants things her way, and so does his mistress. When they all arrive at the castle on Christmas Eve to hear his decision on who will inherit the throne, let The Lion in Winter begin.

Performed by a cast of seven, The Lion in Winter is Umpqua Community College’s (UCC) Theatre Arts Department’s latest production. Originally scheduled to open on Friday, February 23, a last-minute cast change placed Travis Newman, the show’s director, into the lead role as King Henry II, and pushed opening night back one week.

“The role was originally filled by Brad Allen—the guest star of our show,” Stephanie Newman, UCC’s Director of Theatre Arts, said. “He ended up being unable to perform due to health reasons. Due to the time constraints and logistics involved, Travis assumed the role. The transition has been smooth and ironically drama-free.”

When the play opens on Friday, March 2, theatergoers won’t know the difference. With less than two weeks to run through rehearsals and work out the kinks, the newly-formed cast is already showing its performance royalty and just about ready to roar.

With Stephanie Newman in the leading lady role as Eleanor of Aquitaine, the audience is in for a real treat. Watching Newman’s onstage ability to transform from an evil “plot-ress” to scorned wife to discouraged mother is worth more than the admission price.

Newman and Newman, the onstage and offstage husband and wife team, are backed by a cast that includes Richard the warrior, Geoffrey the intellectual, John the king’s favorite, Phillip the boy king of France, and Alais the French princess who is also Henry’s mistress.

The stage, which has been transformed into a 12th Century castle, is highlighted throughout the performance with beautiful costumes created by guest designer Rhonda Turnquist. Original music for the show was created by UCC music instructor Michael Wheeler.

The Lion in Winter runs through March 11 in the Whipple Fine Arts Building's Centerstage Theatre. Tickets are $13 for adults, $10 for seniors over 65 and veterans, and $8 for UCC students with ID and children under 18.

Tickets can be purchased online at tickets.umpqua.edu, or by calling the UCC box office during regular business hours at (541) 440-7700. All proceeds support the College's Theatre Arts program, which serves students in developing professional experiences and contacts in the performing arts.