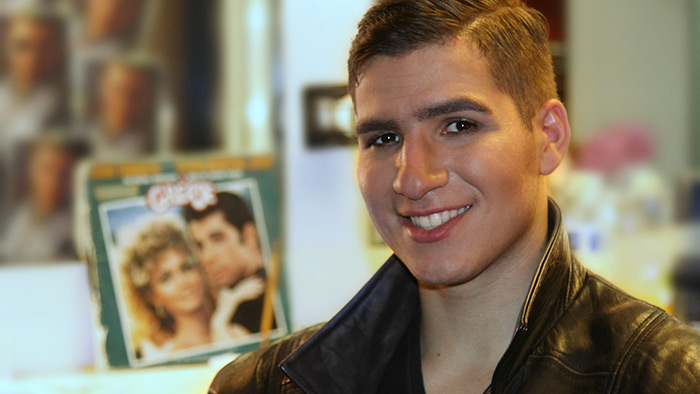 Backstage with UCC employee Ian McGowan—dressed in character as Sonny in 'Grease.'

ROSEBURG, Oregon – At the very least, Ian McGowan deserves an award for playing one of the best supporting roles ever. While he may not have played a leading role in the UCC Theatre Arts Department's production of Grease, in director Stephanie Newman's eyes, he definitely played a mission-critical one. When the call went out for potential sponsors earlier this year, Ian raised his hand.

"At the beginning of the season, Stephanie said 'If you know anyone who would like to be a sponsor, let me know,'" McGowan said. "When I raised my hand, she said let's talk later. I said okay. She had no idea I was the one who wanted to be a season sponsor."

For the past three years, Ian has been an infantryman in the Army National Guard. He was called to active duty this past summer to fight Oregon's wildfires. He spent four weeks working in one of the smokiest fire seasons in Oregon history. The money he earned fighting those fires is what he put toward the sponsorship. When asked why he chose to do it, his answer was simple.

"I did it for Stephanie," he said. "She is such a great mentor. She teaches such fire and passion for the arts. It was simply because of her."

Ian first became involved with theater in 2012 when he was a student at Roseburg High School. When he arrived at UCC as a student in the Fall of 2015, becoming involved with the Theatre Arts Department was a natural fit. Over the past two years, he has played a role in several productions.

"Since my guard duty schedule dictates what I can participate in, the only production I haven't been on stage for was Curtains (the Musical)," he said. "But I did get to be Stephanie's assistant director for it. I actually learned a lot, too. I learned about leadership, which was a very valuable lesson."

Ian played Sonny, one of the T-Birds, in Grease. He also had stage roles in Lear and Sense & Sensibility. He joined UCC's Security Department as a part-time worker in May 2017.

"I just love the arts," he said. "And I'm a proud supporter, too. It would be great to work in theater someday. My current goal is to just make the world a better place."

There are just 3 weeks until Winter term starts on January 3. Use these enrollment quick links - apply, fill out the FAFSA, complete orientation, take placement tests, transfer credits, and register for classes!