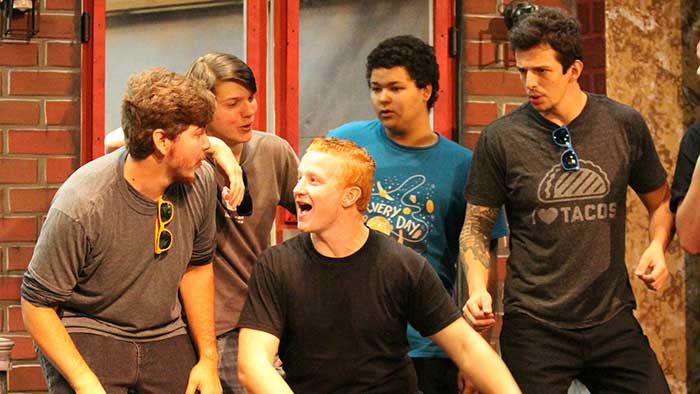 ROSEBURG, Oregon – For the past six weeks, a cast and crew of 50 people has been steadily working to create Umpqua Community College’s version of Grease. The iconic musical is the Theatre Arts Department’s first production of this year’s season. The show opens for a three-week run starting Friday, Nov. 17.

“This is a very large production,” Stephanie Newman, UCC’s Director of Theatre Arts, said. “I like having a big cast and that’s exactly what I got. It includes UCC students and alum, high school students, and community members from ages 12 to... young at heart.”

Newman, who is the show’s director, chose to Grease for a number of reasons.

“Every year is a challenge,” she said. “I’m an educator first. I love doing a wide variety of things. I thought it would be awesome to do something iconic. Iconic shows are really hard because you have to pay tribute to the original and you have to bring your own twist. It’s a fun way to get the year kicked off.”

Grease takes place at Chicago’s Rydell High School in the late 1950s. Sandy and Danny, the show’s main characters, fall in love but struggle to cross boundaries created by the school’s cliques that they may or may not fit into. UCC student Braydon Simmons plays the role of Danny. Madison Whittet, a 14-year-old student at South Umpqua High School, plays the role of Sandy.

Newman bought the rights for the movie music, so she was able to incorporate movie songs into the production as well—songs like “You’re the One That I Want,” Summer Nights,” “Hopelessly Devoted to You,” and more. The music is directed by UCC Professor Michael Wheeler.

During one of the many rehearsal nights, Wheeler told the cast, "It's been a total pleasure working with you all. I'm really looking forward to seeing this."

Grease is rated PG-13. Show times are Fridays and Saturdays at 7p.m.; Sundays at 2 p.m. through Dec. 3, at Centerstage Theatre, which is located in the Whipple Fine Arts Building on the main UCC campus.

Tickets can be purchased online through the UCC box office at tickets.umpqua.edu. Some shows are already sold out.