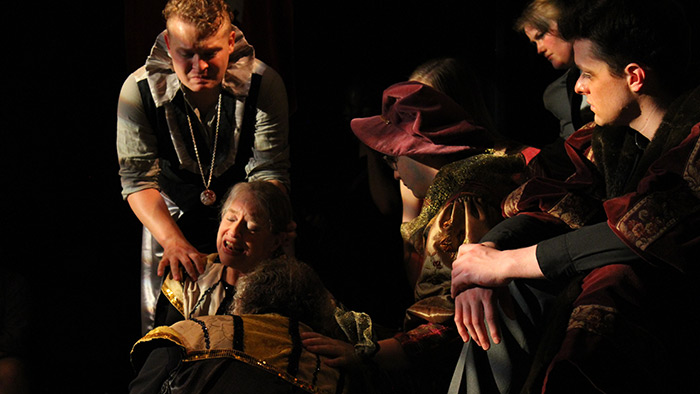 ROSEBURG, Oregon – The Theatre Arts Department at Umpqua Community College (UCC) is boldly going where it has never gone before. Director Stephanie Newman and her students are bringing an adaptation of Shakespeare’s King Lear to Centerstage Theatre. Simply called Lear, the king is played by two actors—one woman, one man—who share the same role. The show is also presented “in the round” with all seating on stage in an intimate setting.

“This isn’t something you get to see in Roseburg,” Aaron Carter, who plays Edgar, said. “It’s edgy. It’s interpretive. And it’s risky. It explores gender and identity, yet it is still supposed to be educational and enriching for us and the community.”

The show was highly conceptual from the start. Newman cast Marnie Allbritten and Carl Jones to play the lead role months ago. As the king, they perform on stage together—speaking at different times, reciting lines simultaneously, or beginning a sentence to have the other end it. For students like John Davis, the learning experience is very different.

“Everything we typically do is for the audience,” Davis, who plays Edmund, said. “This performance is for us. In a sense, we are creating something for us on stage, and hopefully it resonates with the audience.”

In Shakespeare’s time, all roles were played by men—even parts specifically designated to be female. To mix things up, Newman changed the show’s tone even more by having women perform other roles in the play that are traditionally reserved for men.

“Stephanie told us this isn’t her vision,” Samantha Sanders, who play Regan, said. “It is our vision. We are going to build this together.”

And this version of Lear is what they built. While the actors and roles may be different in this creation, Shakespeare is most definitely still Shakespeare. Along with focusing on gender roles and identity, there is quite a bit of violence throughout the show. So, be prepared.

General seating for the show is limited to the first 60 patrons per show. Advance ticketing is recommended. Purchase tickets online, or call the box office at (541) 440-7700; Monday through Friday between 8 a.m. and 4:30 p.m.