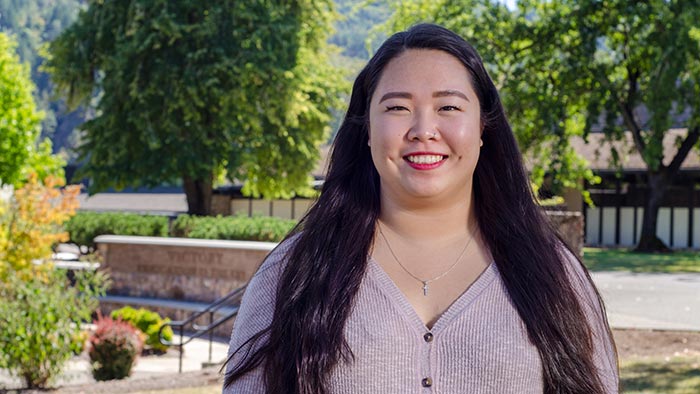 “Umpqua Community College helped me become more involved and gave me the resources I needed to succeed.”

ROSEBURG, Oregon – At fourteen-years old, many teenagers are preparing to start high school. When Minah Kim was fourteen, she was preparing to move roughly 5,325 miles to start a new life in America. Kim was living in South Korea’s national capital Seoul when her parents decided that it would benefit their daughter if she continued her education in the United States.

In September 2014, Kim had made the move to America and was starting her education at Canyonville Christian Academy. This boarding school appealed to Kim’s parents as it offered dormitory living for international students, making her transition to the states easier.

“My parents came with me and stayed for three days to meet all the school staff members as well as my roommate. They also helped me get a few necessary things for my room but after that they left to go back to Korea.”

Kim was eager to start her education but even with her parents support, Kim’s move did come with its own challenges. The biggest challenge she had to face was learning English.

“I had no idea how to speak English. I didn’t even know how to spell ‘English’. Even though that was a challenge for me, I still got through it.” Now fluent in three languages (Korean, English, and Spanish), Kim is grateful to have had the opportunity to travel and experience different cultures.

Kim had studied at Canyonville Christian Academy for four years before starting her education at Umpqua Community College (UCC); however, this was not what her parents had planned. Kim’s parents were wanting her to attend a well-known four-year university after her high school graduation. Kim believed that receiving an education at a community college would be more beneficial to her.

“They wanted a good reputation university and I wasn’t for it,” she said. “I went to a private Christian school that was very tiny. My senior class had fifty kids including myself. I wasn’t ready to jump into one-hundred, two-hundred kids in my classrooms, Kim said. “I convinced them that I would love to go to a community college because I never saw anything wrong with it. Why bother going to a bigger university and paying more money for it if you can go to a community college?”

When Kim was accepted to UCC, she was selected to be a UCC Scholar. Students chosen to be a Scholar may receive a 12 credit tuition waiver, for six consecutive terms to assist with the completion of an Associate’s degree. Kim was required to participate in 2 hours of service on campus each week while attending UCC full time, maintaining a 3.50 quarterly GPA.

While attending UCC, Kim was also a member of Phi Theta Kappa and worked part time as a Peer Mentor, helping other students navigate their way through college.

After completing the 2020 spring term, Kim graduated from Umpqua Community College with her Associates of Arts Oregon Transfer degree (AAOT). She plans to continue her education at Oregon State University (OSU), majoring in Psychology.