Learning Through a Different Lens 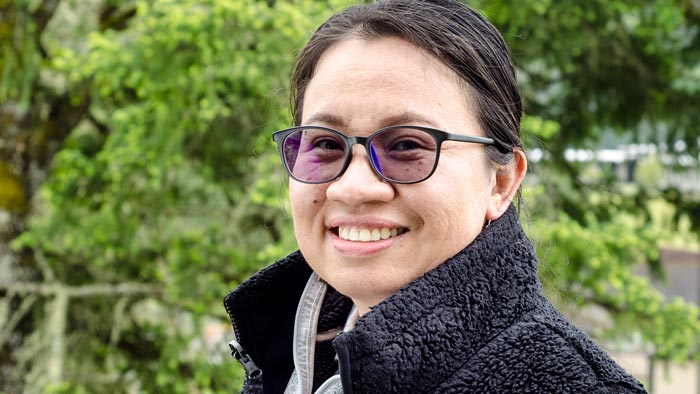 “Going to college gave me sense of purpose and direction. Through this journey, I have been evolving."

ROSEBURG, Oregon – Many people take the ability to communicate in English for granted. Reading, writing, and speaking English are just things most people who live in Douglas County can easily do. But for some people, it takes a great deal of effort and determination to even begin to learn English. For nearly two years, Sophavid Choum-Starkey has been learning through a different lens. What started as a simple goal to fit in with the community has led the Umpqua Community College (UCC) student to find her purpose and direction in life.

Sophavid’s journey to Oregon was less than traditional. She was born in Cambodia—a country that endured the Khmer Rouge Regime in the late half of the 1970s. During that time, around two million Cambodians starved to death or were executed. Sophavid’s parents survived. Following the regime’s reign, they continued to live as farmers. Dedicated to raising their crops and animals, they never completed school. Today, their educational dreams live in their children.

“My dad is really happy I am doing this because he also didn’t get a chance to do it,” she said. “He always wanted his children to do better, so he is proud of my decision.”

About 10 years ago, Sophavid played video games. In her words, it was something she “tried and did as a kid.” During that time, she worked at a nonprofit organization in Cambodia that helped restore sight to the blind; video games were simply a hobby. While playing, she happened to connect with a man who lived in California. Over the course of several years, the two became friends. He taught her English and helped her with writing. One day, he asked her a question.

“I was driving down the road and he asked me to marry him,” she said. “He had asked me a few times before and I thought he was kidding. But this time, I finally said yes.”

By the time they got married in 2018, her husband had moved back home to Roseburg. After joining him here, the culture shock hit. For the next six months, Sophavid stayed in her house. One day, a class schedule from UCC arrived in her mailbox. She discovered UCC’s Woolley Center and its English Language Acquisition (ELA) courses inside.

“I had difficulty talking to people,” she said. “Communicating effectively was really hard for me. I decided to go back to school because I wanted to improve my English.”

Sophavid discovered a lot more than language skills at the Woolley Center’s Harvard Avenue location. A pre-test showed she was beyond ELA courses; she was ready to work on a GED. While the price was right for her at $20 per class, what she needed next was courage and a lot of it.

“I cried on my first day of writing class because I didn’t know about many things in this country,” she said. “I only knew about America through movies at that time. For me to blend into the culture, I needed an understanding and the GED program helped me do that.”

Through the program, Sophavid’s confidence grew. She learned about government, American history, economics, and much more.

“The benefit of a GED as an immigrant was crucial,” she said. “All of it gave me the contextual information about this country that I needed.”

After completing the GED program in one year, Sophavid immediately enrolled at UCC as a degree-seeking student. She also applied for a job as a work-study student and became instantly immersed in UCC’s Office of Communications and Marketing, where she continues to expand her writing and speaking skills.

“I get to learn so much more in my job that I did not expect,” she said. “I always learn about technology, digital marketing, writing, and photography. On top of doing our jobs and being busy, we always help students, too. This experience helps me see a better future. It’s not the money [I earn] that keeps me going. This is where I can strengthen my skills and see myself in the future.”

While Sophavid continues with her studies and dedicates time to her work, her parents and husband continue to support her efforts to grow and earn a college degree.

“I am not only doing this for myself. I am doing this for them, too, because they did not get to,” she said. “Going to college gave me sense of purpose and direction. Through this journey, I have been evolving. When I see others going through the same things I went through, I can now reach out and let them know what’s available.”