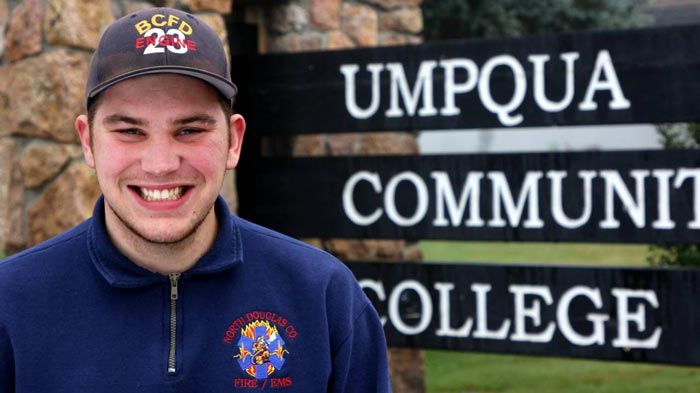 UCC student Ben Simons was recently elected as the youngest mayor in Yoncalla history. He assumes the office in January 2019.

ROSEBURG, Oregon – When Ben Simons decided to attend Yoncalla school board meetings in the eighth grade, he had no idea where it would lead. All he knew is that he was taking his teachers’ lessons to heart. Now an 18-year-old student at Umpqua Community College (UCC), Simons is juggling school work while preparing to become Yoncalla’s youngest mayor in history.

“When I was in school, my history teachers were adamant about participation,” he said. “They told me the 18 to 24 demographic needed to step up and be involved. They said the easiest thing for us to do is vote.”

But Ben had a few years to wait before he could do that. After all, 13 year-olds can’t vote. He attended the school board meetings—just to see what was happening.

“At the time, Yoncalla was talking about shutting down the school,” he said. “So a friend and I went to the meeting.”

That meeting became the first of many, many meetings since. Ben went on to serve on a committee that was charged with creating the school’s master plan. Even the friend who went to that first meeting with him ended up serving on the school board for a few years.

Earlier this year, Ben stepped up his game. In August, Yoncalla was looking for a replacement on the city council. He wrote a letter expressing interest, the city voted, and he was quickly appointed to the position one seat. A short time later, the town’s mayor of 10 years announced he would not seek re-election. It paved the way for Ben to throw his hat in the ring.

Following a successful campaign, the majority of voters chose Ben. He beat out two other candidates for the seat in November’s general election with 41% of the town’s 359 votes.

“A lot of people in town are glad,” he said. “People locally know I have the skills to do the job. I think they are excited for what’s going to happen. But nationally, people just don’t know me.”

Along with a little local notoriety, the majority of Ben’s unexpected attention has come from being interviewed by news outlets across the country. His dad recently started referring to him as the poorest celebrity on the planet. As a community volunteer, Ben doesn’t get paid—and that includes his service with the North Douglas County Fire Department and his upcoming job as mayor.

“My plan is to stay involve and do whatever I can to be there and help others,” he said. “My goal is to do the best for Yoncalla.”

Ben will be sworn into office on Jan. 8, 2019. Until then, he will continue to serve as City Councilor #1 and work toward his associate degree at UCC. When he graduates in two years, he plans to transfer to a university and study business administration.