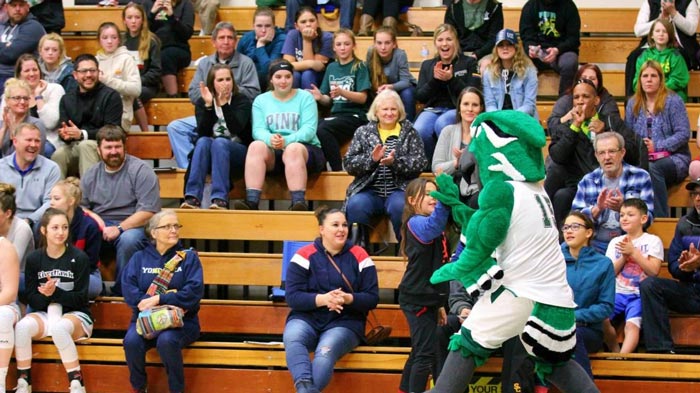 Along with watching men's and women's basketball action, UCC unveiled its new Riverhawk mascot to the community.

ROSEBURG, Oregon – Pack the Gym Night at Umpqua Community College (UCC) was nothing but net. On Wednesday, Jan. 30, a crowd of 400 people came together for an evening of fun, giveaways, basketball action, and the unveiling of UCC’s new Riverhawk mascot.

The men’s and women’s basketball teams hosted Lane Community College. Both teams triumphed over the Titans after two very close games. Fans were on the edge of their seats, but during the final seconds both teams came out on top. The women’s team finished strong with a final score of 91-87. The men’s team followed with another close game scoring 64-61.

Between the two games, a big green bird made a soaring debut. With special help from the cheerleading teams from Roseburg High School, the newly-redesigned Riverhawk mascot pumped up the crowd. When the Riverhawk wasn’t cheering on the team, it went up into the stands; handing out giveaways and goodies. Photo-ops were also a crowd favorite, with many of the younger fans wanting a picture with the bird.

The College hopes to boost school spirit with the new mascot being involved more in campus events. A special thanks goes out to the RHS Cheerleaders for help with the unveiling, and to the Umpqua Singers, Margarita Arredondo and Ashley Pena, who performed the National Anthem.

If you would like to cheer on the teams at future games or learn more about the teams, visit the UCC RiverHawks website where game schedules, rosters, news, and more are provided.