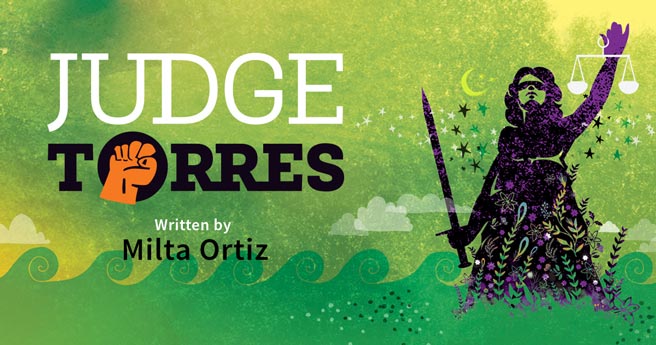 Woven with magical realism and Mayan folktales, Salvadoran playwright Milta Ortiz created this new work inspired by her own immigrant experiences. Judge Torres is a story of triumph against the odds; Xiomara made her rise from undocumented immigrant to one of only a few Latina judges in Oregon. She brings diversity to the bench not often seen in Oregon or across the nation – as a Latina but also as a child abuse victim and product of the foster care system.

In 1980, when she was 9, she crossed a river with her family, led by a “coyote”, who brought them to their new lives in America. When she was 13, she and her siblings were placed in foster care. In the play, La Siguanaba, a mythical being from Salvadoran legends, guides her, providing strength and wisdom to light the way, and Jan, her court-appointed advocate, pulls her up when the challenges become too overwhelming. As a “MeToo Dreamer” the odds of success were small, statistically only 3% of foster kids make their way to college, making Xiomara’s story of becoming a judge a great inspiration.

“If I can reach one kid who is experiencing some kind of sexual abuse...and that kid speaks out, then sharing my story will have been worth it to me.” Judge Torres

About the Playwright:
Milta Ortiz also left El Salvador at an early age and grew up in the Bay Area. Currently she lives in Tucson, AZ, where she is the Associate Artistic Director at Borderlands Theater. As an NNPN playwright, she wrote and developed Más, which premiered at Borderlands Theater and was then nominated for an American Theatre Critics/Steinberg New Play Award and Citations, and a Tucson Mac award for best drama. Her other works include; Sanctuary, A Tucson Pastorela, Disengaged, You, Me and Tuno and Lilac Roses.