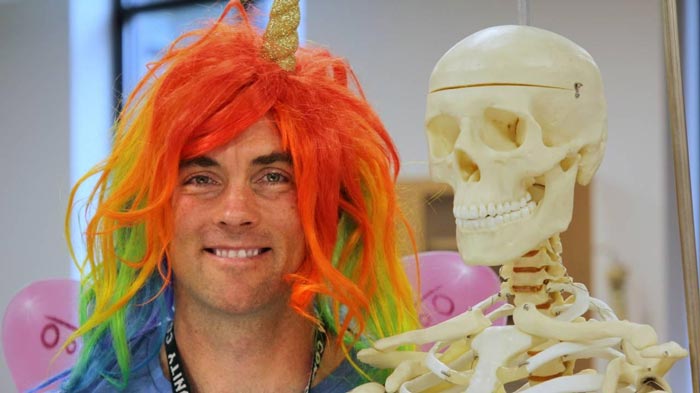 UCC chemistry instructor Sean Breslin's philosophy on teaching: Have fun and make people think and look at the world in a different way.

ROSEBURG, Oregon – Have you ever had a teacher come to class wearing a rainbow wig? How about one with a unicorn horn on top? If not, then you probably haven’t met Sean Breslin. The chemistry instructor has taught at Umpqua Community College (UCC) for 10 years. While chemistry isn’t always the most-liked class choice for many students, when you have a teacher like Sean who makes it fun and enjoyable, that just might change.

From the time Sean was young, he knew he would work as a scientist. At first, he wanted to be a genetic engineer. Originally from Greene, a small town in Upstate New York, he went to college at a liberal arts school in Maryland named McDaniel College. It was there he discovered chemistry. He received two bachelor’s degrees; one in Biochemistry, one in Chemistry. He went to graduate school at Cornell University and received two master’s degrees; one in physical organic chemistry, one in science teaching.

“Chemistry was my first love,” he said.

He says he fell in love because of two people—his chemistry teacher and his grandfather.

“My grandfather was like a book and knew just about everything,” Sean said. “He would give me long lectures about any subject I asked him about.”

As for his teacher, Sean says he loved how crazy and exciting she was, and that she always made it fun for her students.

“We never knew what she was going to do that day,” he said.

Sean never thought about becoming a teacher until he became a tutor in college.

“The thought of helping others understand the information made me happy and feel accomplished,” he said.

He began teaching kids who didn’t have the greatest lives and really needed help in school. Sean says teaching is the most rewarding career out there.

“Teaching is a way of combining everything I love,” he said. “Being able to see students succeed not only in class, but in life as well.”

Sean ended up at UCC by chance. He believed his interview here was supposed to be a training one. When he saw the water in the center of the campus and how it looked like a river flowing down it, all he could see was an image of himself whitewater rafting. That’s when he knew he was supposed to be here to teach.

His philosophy on teaching is to have fun and make people think and look at the world in a different way.

"If you are interested in teaching find a teacher you love and try to figure out why,” he said. “If possible, spend as much time with him or her, ask questions, follow them around, be a pest. Teaching is an art you never master, but the great ones have a huge impact.”

Even the ones who wear a rainbow wig.