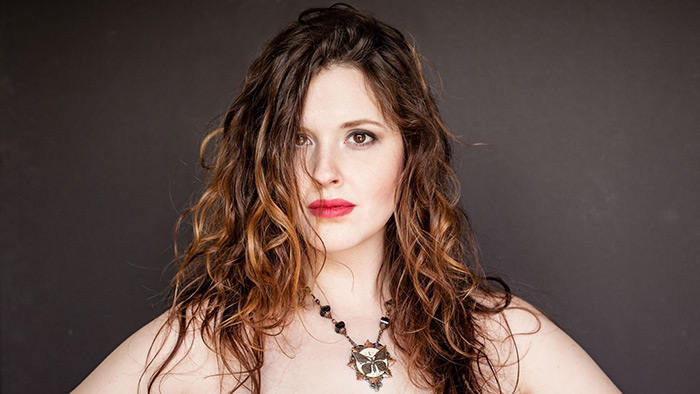 ROSEBURG, Oregon – Internationally-renown jazz vocalist will be in concert with the Umpqua Chamber Orchestra and Umpqua Singers at the First Presbyterian Church of Roseburg on February 6 at 7:30. Admission is at the door - $10 per person; Children (18 and under) and students are FREE! For more information, contact This email address is being protected from spambots. You need JavaScript enabled to view it. or call 541-440-4693.

Authenticity and connection is one of the primary keys to jazz singer Halie Loren’s artistic approach: whether it’s injecting the American Songbook with old-school soul or finding a familiar thread of nostalgia in newly-penned originals, no matter the language (her repertoire finds her singing in French, Spanish, Portuguese, Italian, and more), Loren finds ways to bridge cultures and genres in unlikely and always heart-felt ways. “Music creates greater connection with other people, connection to my purpose for existence,” Loren says. With purity of tone and rare interpretive prowess, Loren brings a fresh and original perspective to time-honored musical paths, channeling her innate understanding of connectedness across musical boundaries to forge bonds with diverse audiences in North America, Asia, and Europe.

Loren’s debut release of eleven original songs, Full Circle (2006), was hailed for exhibiting “a power and grace that are nearly unheard of in popular music.” Her sophomore album, They Oughta Write a Song (2008), brought to light her life-long love of jazz standards, and subsequently won a national independent music award for best vocal jazz album. Her holiday album with pianist Matt Treder, Many Times, Many Ways: a Holiday Collection, also recorded in 2008, was first released in limited edition, then followed with worldwide distribution in 2011. Her fourth CD, the live album Stages (2010), was met with critical praise, including being named as an Editor’s Pick at CD Baby and “best live album of the year” at Wildy’s World. After Dark followed in 2010, with the Loren original Thirsty winning the Independent Music Awards’ Vox Pop poll for best jazz song of the year.

In its savvy concoction of jazz standards, re-imagined pop classics, and shimmering new originals, 2012’s Heart First revealed a confidently maturing artist on her own heartfelt journey. It was among the top 10 jazz CDs in Hot New Releases at Amazon in the U.S. and Canada, and reached No. 1 on the iTunes Canada jazz albums chart. In 2013, Loren recorded and produced (along with co-producer Matt Treder) Simply Love, a collection featuring three sparkling new originals and ten radiantly re-imagined classics from contrasting eras of the American songbook. Released in Japan (on JVC/Victor) in June, it rose to the top of the Japan charts in pop and jazz even before its release date, and post-release rose to the No. 1 spot on Billboard Jazz / Japan. Her newest release, Butterfly Blue, was released in Japan on January 21, 2015, and globally on June 9th. It debuted at #1 on Japan’s Billboard Jazz chart and placed in chart’s top 10 list for 8 weeks.

Loren’s music has proven irresistible to concert halls, whose numbers now include performances with the Jazz Orchestra of Sicily, the Corvallis-OSU Symphony Orchestra in Oregon, and the Monroe Symphony in Louisiana. For the past three years she has traveled the world with the members of her original band, including Canada, Japan, Italy, China, Hong Kong, and South Korea.