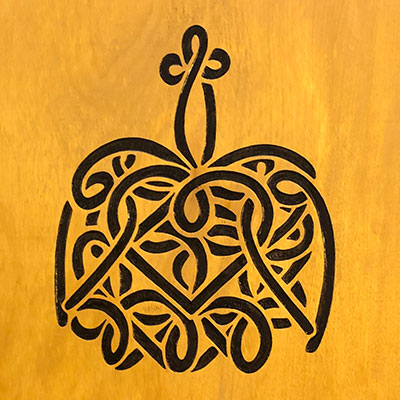 ROSEBURG, Ore., October 26, 2022 — Umpqua Community College will host an Endangered Alphabet Art Exhibit at the campus library to spotlight languages that are in danger of extinction.

The exhibit features languages in the form of wood script carvings, curated by Dr. Tim Brookes of the Endangered Alphabets Project. Dr. Brookes has worked to preserve often ancient languages all over the world and has recently engaged with Native American tribes in Canada, Vermont and New York. His work also includes collaborations with tribal nations such as the Cree, Ojibwe, Inuktitut, Cherokee and Osage.

Dr. Brookes’ mission is to play an active role in preserving endangered cultures by using their writing systems to create artwork and educational materials.

According to his website, www.endangeredalphabets.com, half of the world’s estimated 6,000 to 7,000 languages will be extinct by the end of the century, while 85 percent are considered endangered.

The exhibit will be featured at the UCC library from November 1 through 9. Dr. Brookes will be on campus for a lecture on his research on November 9 from 3:00 – 4:00 p.m. Both the lecture and exhibit are free and open to the public.