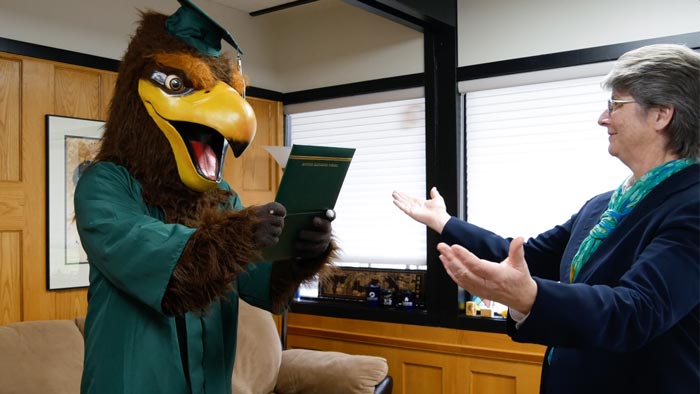 As one Riverhawk leaves the nest, a new one joins the flock.

ROSEBURG, Oregon – Tuesday, Jan. 29, 2019, marked the end of an era and the beginning of a new one as Umpqua Community College (UCC) celebrated the graduation of its original big brown bird, and introduced a fresh-feathered freshman mascot. It was 2011 when the original Riverhawk first landed on campus.

“I remember that first day sitting in the hallway of Whipple nervously waiting for my name to get called,” Riverhawk said—reflecting back to mascot audition day. “I had a minute and a half long routine planned out and had to do it in front of a ton of people in Centerstage Theatre. Little did I know I’d be performing in front of tons of people just weeks later and countless others as time went on.”

Other memories included taking tons of photos, fishing in nearby Amacher Park, relaxing on the UCC Bookstore couch, and attending many events since then.

“One photo shoot took several days doing a lot of random things including a lot of new things—like trying out chemistry experiments with (Joseph) Villa,” the Riverhawk recalls. “It has been so rewarding and fun. In the summer it could be hot—considering I should have been flying north for the season. But still, it was always a fun time to get out and represent UCC. No matter what the case, people always reacted fondly.”

After eight years of service, the avian artist bids farewell to its home nest. With a marketing degree in hand, the brown bird is embarking on a journey north to pursue further opportunities to represent teams in the Seattle area. The ultimate dream job would be to become a seahawk. 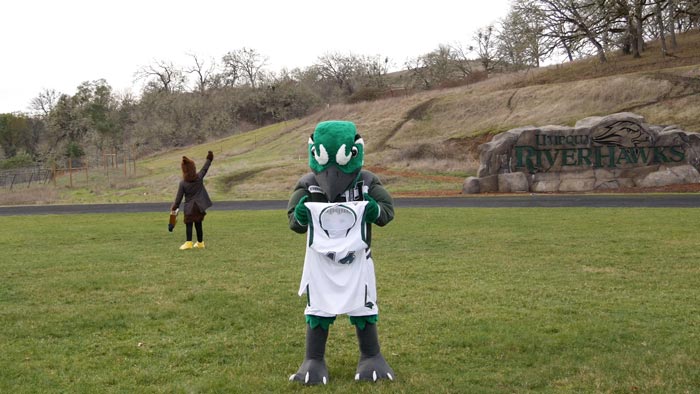 As for the new freshman joining the flock, the now green mascot bird arrives at UCC—thanks to a $10,000 “scholarship” courtesy of the UCC Foundation.  A board vote in September last year approved the funding for the new mascot. The new Riverhawk stands six feet four inches tall, has a six-foot wingspan, and was hatched across the river from UCC’s campus.

When talking about the new Riverhawk, the original bird had the following to say, “I’m excited to see how the public reacts to this new Riverhawk.”

The well-seasoned mascot also offered some words of wisdom for the incoming freshman, “Stay hydrated. Stay with it. Enjoy every minute of it. It’s a truly rewarding experience.”